As they led him away, they seized a man, Simon of Cyrene, who was coming from the country, and they laid the cross on him, and made him carry it behind Jesus.
~ Luke 23:26

I grew up thinking Simon of Cyrene was a white man. Why wouldn’t I, considering that it is only the very rare artistic representation of this scene that portrays him otherwise. And anyway, I thought Jesus was white, too. He’s got blue eyes and blond or light brown hair, right? At least that’s how he looked in the pictures they showed me. Now I know better. Jesus was a Middle Eastern Jew, and Simon came from a city in the North African country we now call Libya. Neither was a European white man.

If you’re white, you might wonder why this matters. I would say that if in your mind’s eye you picture the Gospels populated by men who look like the figures in the religious art that’s most familiar to us, you might easily misunderstand. Christianity isn’t a white religion that generously invites others to come in and join us. We’re part of something much bigger than that. Esau McCaulley, author of a book titled Reading While Black, says the idea “that Christianity is fundamentally a white religion … is simply historically false. The center of early Christianity was in the Middle East and North Africa. But deeper than the historical question is the biblical one. Who owns the Christian story as it is recorded in the texts that make up the canon?”

If you’re Black or Brown, I won’t presume to explain what it should mean to you. But McCaulley says it’s important to know that “Black Christians can look to early African Christianity as their own. … The Christian story is ours too.”

Back to Simon of Cyrene, who helped Jesus carry the cross. He’s also mentioned in Mark’s Gospel, and Mark adds the detail that he’s the father of Rufus and Alexander, presumably because they were known to the audience he was writing for. McCaulley says, “At the moment in which Christ is reconciling the world to himself on the cross, an African family is making its first steps toward the kingdom.” Today I give thanks for the early witness of Simon, Rufus, and Alexander, and – as McCaulley puts it – for the way “the very diversity of cultures is a manifestation of God’s glory.”

Reading While Black: African American Biblical Interpretation as an Exercise in Hope, Esau McCaulley; the quotes are found on pages 116, 97, and 102. 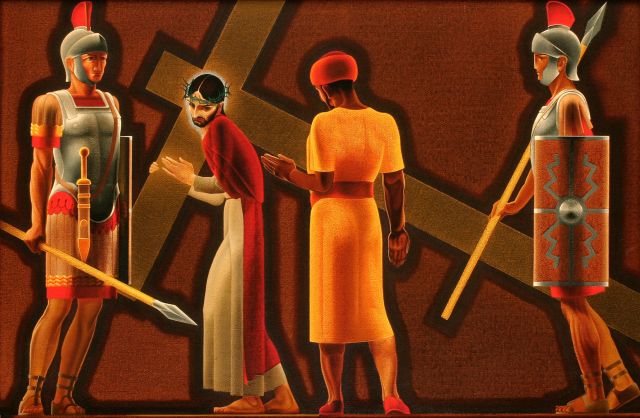 This December in the parish where I worship we’re reading the 24 chapters of Luke’s Gospel one per day through Dec. 24.