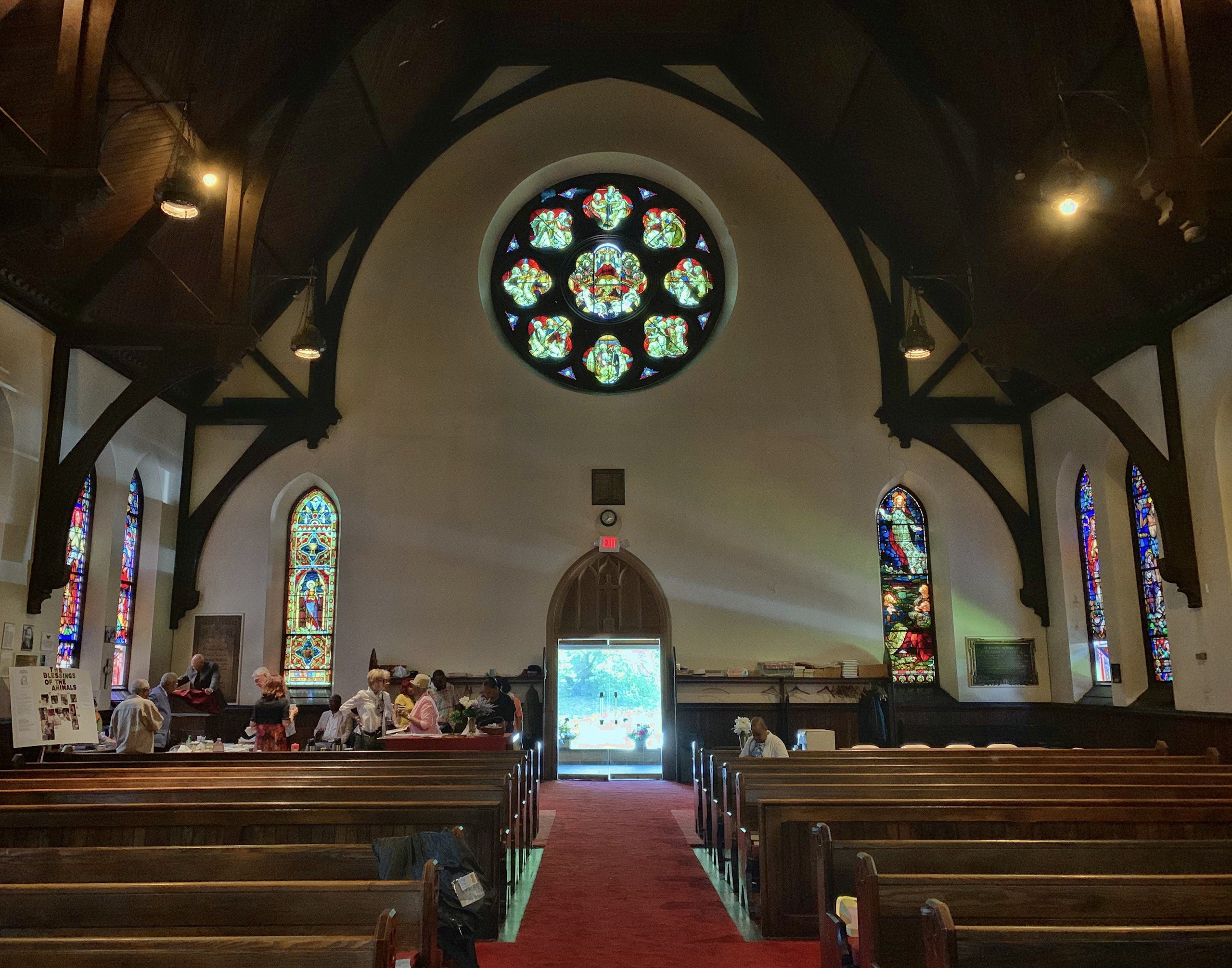 In today’s Gospel, we hear something a little different from most of the stories we know about Jesus. He meets a poor soul who is possessed by demons, and he casts those demons out and sets the man free to live a normal life. And that part is nothing unusual, because so much of Jesus’ ministry was taken up with just that kind of healing.

But what’s different about this story is what happens next.

All through the Gospels, we hear about the crowds who follow Jesus wherever he goes. Sometimes the people press in so close that he can hardly move.

They follow him when he tries to go off to quiet places to pray, so it’s hard for him to ever be alone. They follow him into the wilderness by the thousands, without any concern for the fact that it’s getting late in the day and they’ve brought nothing to eat.

When he goes to the lakeside, they crowd around him at the edge of the water so that he has to get into a boat and pull off a little ways, then turn around and face back to shore to make room so he can speak to them. And they crowd into and around the houses where he’s staying, so that his mother and brothers can’t get close enough to talk to him, and the friends of a paralyzed man who bring him to Jesus to be healed can’t get him inside—they have to go up on the roof and move some of the tiles so they can lower him into the room where Jesus is.

Wherever Jesus goes, the crows come after him. These are poor people, people who have been oppressed and taken advantage of, by a government that doesn’t represent them, and even by their own religious leaders. They come to Jesus looking for healing and wholeness. They come to hear him teach. They come just to be close to him, the way you do when you sense that someone really cares for you. They come because he values them for who they are.

Wherever Jesus goes, people want to be with him.

But that doesn’t happen in this morning’s Gospel, and this story stands out as something very different because of it. In today’s Gospel, people actually ask Jesus to go away. And he does.

He’s come across the Sea of Galilee by boat, and this is the crossing where Jesus falls asleep and a fierce storm kicks up, and his friends are so frightened they wake him with their cries. Then winds and the waves that are threatening to swamp the boat are calmed at his command, and his friends are relieved—but at the same time, they’re a little frightened by what they’ve just witnessed, so already there’s a hint that his power 1qcan be somewhat unsettling, even to his friends.

When they reach shore on the other side, they’re met by this poor man who is possessed by demons so numerous they call themselves Legion, the word for a Roman cohort of 6,000 soldiers.

Under the control of these demons, the man won’t keep his clothes on and he can’t live normally with other people. He spends his time roaming among the tombs instead. And when people try to take care of him by restraining him with shackles and chains and placing him under guard, he breaks free and escapes every time.

His demons recognize Jesus and know his power, and they beg not to be sent out of the man into nothingness. And Jesus agrees, and he lets them go out of the man into a herd of swine, but this is just a brief reprieve, because the swine immediate stampede and run off a high cliff, falling into the water below and drowning.

And the next time we see this poor soul, he’s sitting at the feet of Jesus, dressed and in his right mind, begging to be allowed to stay with Jesus. But Jesus tells him to go back home and tell everyone how much God has done for him, and he does. He goes back to share the good news that, through the power of God, he’s been made whole again. He’s been given back his identity, and he’s been set free from a situation that was making it impossible for him to live a full human life

He wants to stay with Jesus, but everyone else thinks Jesus should just go away.

They were used to treating this marginalized man as something not quite human. They didn’t know who Jesus was, or what he was about, but they were afraid of this power that could drive away evil and bring a hopeless man back from the edges of society. If Jesus could do something like that, who knew what he’d do next? Who knew what he’d do to them?

If Jesus came to us and offered his healing – if he offered to set you free from all those things that keep you from being your best self – would you send him away? I surely pray that I would not.

But the truth is that true personal freedom can be exhilarating, but it can also be scary. It’s a challenge, because it calls on us to accept the responsibilities that go along with freedom. It calls on us to get out there and live our lives to the fullest, proclaiming to all who can hear the good that God has done for us.

The Gospel always points toward this kind of freedom, and that is good news for us. The Gospel shows us that Jesus has the power to set us free from the things that hold us back from being the people God has created us to be.

Freedom, true freedom, is always cause for celebration.

Last Thursday was the celebration of the day that’s know as Juneteenth, and I have to admit that until just a few years ago, I didn’t know what that was. But June 19 is also my birthday, and I really liked the idea that there’s a bigger celebration going on that day, even if it isn’t about me. I’m sure people know this, but just for the record, Juneteenth commemorates the announcement, on June 19, 1865, of the abolition of slavery in Texas. Which was the last place to hear the good news of the Emancipation Proclamation, so it’s effectively the day when slavery was abolished across this nation.

And it’s still celebrated, all these many years later. Like the man who was set free from his demons, those who have come out of captivity into freedom will just naturally want to celebrate and to share that good news. But freedom is something we must claim, and continue to fight for, both for ourselves and for others.

And yet the Gospel is always pointing toward true freedom. Jesus came with the power to set us free from the things that keep us from living as the people God created us to be, and that shouldn’t be something we’re afraid of.

The people in the country of the Gerasenes asked Jesus to leave because they were afraid of his power. Maybe you could say they were actually afraid of change. There was this man who had roamed naked among the tombs, and now they saw him sitting there calm and dressed and looking like anybody else. He was ready to go home and live like anybody else. And who knew what might happen if Jesus turned that power on them.

But today’s Gospel is about the power Jesus has to change our lives. Don’t send him away.